Truly pathetic, especially in light of this. --PG 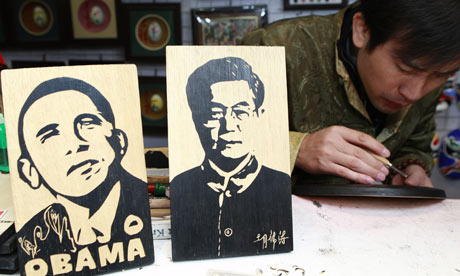 An artist in Shanghai displays woodcut portraits of US President Obama and Chinese President Hu Jintao. This is Barack Obama's visit to China as the US president. Photograph: SHERWIN/EPA

Barack Obama acknowledged today that time had run out to secure a legally binding climate deal at the Copenhagen summit in December and threw his support behind plans to delay a formal pact until next year at the earliest.

During a hastily convened meeting in Singapore, the US president supported a Danish plan to salvage something from next month's meeting by aiming to make it a first-stage series of commitments rather than an all-encompassing protocol.

Postponing many contentious decisions on emissions targets, financing and technology transfer until the second-stage, leaders will instead try to reach a political agreement in Copenhagen that sends a strong message of intent.

While this falls short of hopes that the meeting would lock in place a global action plan to replace the Kyoto protocol, it recognises the lack of progress in recent preparatory talks and the hold-ups of climate legislation in the US Senate.

Michael Froman, US deputy national security adviser for economic affairs, said: "There was a realistic assessment ... by the leaders that it was unrealistic to expect a full internationally legally binding agreement to be negotiated between now and when Copenhagen starts in 22 days."

Britain's climate change secretary, Ed Miliband, tried to put a brave face on Obama's move, insisting it is still possible to reach a broad political agreement on carbon emissions targets, but senior Labour MPs admitted they feared the necessary momentum for a detailed agreement would be sucked from the Copenhagen event if politicians know a deal has been postponed to the next scheduled meeting in Mexico City next year.

Gordon Brown had pledged to go to Copenhagen to help broker a deal, insisting there could be no plan B. Miliband again today urged Obama to attend.

There will now be intense discussions on whether the political agreement at Copenhagen contains any detailed meaningful commitments.

Denmark's prime minister, Lars Lokke Rasmussen, the host and chairman of the climate talks, flew overnight to Singapore to pitch the deferral plan to 19 leaders, including Obama and China's president, Hu Jintao, at an unscheduled event during the Asia-Pacific Economic Cooperation summit. He insisted that the Copenhagen talks could still set political targets and outline commitments.

"Given the time factor and the situation of individual countries we must, in the coming weeks, focus on what is possible and not let ourselves be distracted by what is not," Rasmussen told the leaders. "The Copenhagen agreement should finally mandate continued legal negotiations and set a deadline for their conclusion."

Obama spoke in support of the proposal, cautioning the group not to let the "perfect be the enemy of the good", Froman said.

The proposal by Denmark would buy time for the US Senate to pass carbon-capping legislation, allowing the Obama administration to bring a 2020 target and financing pledges to the table at a UN climate meeting in mid-2010.

But there are many other divisions between developed and developing nations that could prolong talks. It was unclear if China, the world's biggest emitter, and other developing countries supported the two-stage plan.

The level of international support may be clearer at a meeting on Monday of about 40 environment ministers in Copenhagen. Other governments said there was little choice. "Leaders were clear in their view that the current officials-led process is running into all sorts of difficulties, and therefore it is time for leaders, politically, to step in," Australia's prime minister, Kevin Rudd, told reporters after the meeting with Rasmussen. "It's going to be tough as all hell, but let me tell you I believe everyone is seeking, right now, to put their best foot forward."

The development casts new significance on the summit in Beijing tomorrow between Obama and Hu.

According to the UK government's former chief scientist Sir David King, these talks are the best chance for the world to agree a new deal. "Once Hu Jintao and Obama agree, I think the rest of the world could fall into place," he told the Guardian. "It's a head of state issue. Obama, through an agreement with Hu Jintao, could be able to deal with some of the concerns of the American population."

Sources close to the US-China talks are playing down the chances of a public breakthrough, saying only modest progress may be announced, in the area of clean technology cooperation. But signs of collaboration could unblock the logjam in the Senate and in international talks.

"Copenhagen has come a year too early. There was no way Obama could get this together for December this year," said King. Chinese negotiators have been saying much the same thing in private.

US officials are anxious about the timing of a likely announcement from China on its first carbon intensity target, thought to be around 40% to 45%reductions relative to economic growth by 2020. Although not internationally binding, a Chinese move could see the Obama administration blamed for a lack of progress.

The extension is not unexpected given the downbeat statements by world leaders in recent weeks. But the delay has frustrated those who feel time is running out. "Heads of states must go beyond simply discussing the problems. They have to start solving them," said Diane McFadzien of the Worldwide Fund for Nature."