This is so true. If anyone has not walked on astroturf in the summer, I really recommend trying it to appreciate what this is all about. Friends of mine in Pasadena put in astroturf around their pool and I burned my feet in about two seconds, not realizing.

A prime example of the Park Commissioner's public safety initiatives; they are all hot air.
This is why he needs so much money; to remove anything natural (artists, grass,
people) and replace them with artificial crap owned by corporations.


Hot footing it: The heat is on artificial turf 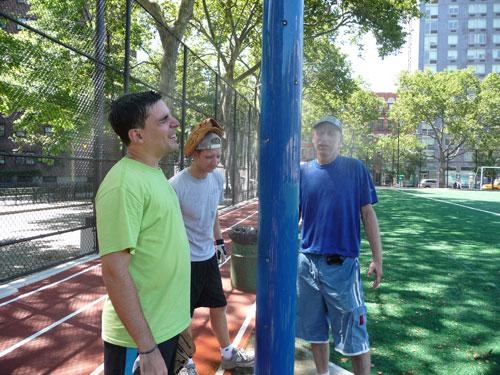 Lead, heat and wear, tear and maintenance relating to artificial turf were the subjects of our March 23 article (“City parks: Paradise, paved over, hazardous to health?”). This follow-up focuses primarily on the heat factor. With an indoor/outdoor thermometer at the ready, Chelsea Now visited the three local athletic fields previously highlighted to take the temperature of the artificial turf.

As reported in the March article, Geoffrey Croft (head of the watchdog group, NYC Park Advocates) took, before noon, temperature readings at a dozen New York City parks in July 2010. Artificial turf fields measured over 170 degrees — the highest temperature recorded in his three years of monitoring. By 9:15am, the temperature had already risen to over 140 degrees. “Young children are particularly susceptible, as it can take only two seconds to burn on solid surfaces greater than 140 degrees, according to doctors,” said Croft.

In 2009, the City Council passed legislation mandating the presence of warning signs on artificial turf fields. The posted sign warns about “potential heat-related risks involving synthetic turf, including overheating and dehydration…if you experience symptoms of heat-related illness, such as dizziness, weakness, headache, vomiting or muscle cramps, move to a shaded area. Drink water, rest, and seek medical attention if you do not feel better.”

The NYC Health Department says people can suffer dehydration, heatstroke and thermal burns at field temperatures above 115 degrees….” Croft added, “which can lead to death.”

Rick Doyle, president of the Synthetic Turf Council, admitted he didn’t think “anyone in our industry would suggest it’s a good idea to play on a surface that’s that hot.” Speaking to NPR on August 7, 2008, he added, “Just as coaches have to reschedule games due to rain when they play on grass fields, so too they need to reschedule or consider an alternative surface to play on when it’s sunny.”

The 50,000-square-foot renovated field opened this May at a cost of around $2 million. Philip Abramson, a spokesperson for the NYC Department of Parks and Recreation, wrote in an email, “The project provided for the replacement of the existing synthetic turf [knitted nylon carpet, no infill] with new [polyethelene fiber tufted, with coated sand] infill that will accommodate softball and football, an improved drainage system, new ADA [Americans with Disabilities Act] accessible dugouts and drinking fountains, a bike rack and a misting station.”

Saturday, July 30, 2pm. Air temperature: In the upper 90s, on one of those stifling heat wave days. Turf temperature: At least 120 degrees (the highest our thermometer could register). In that heat, a friendly softball game took place between two teams composed of Stuyvesant High School graduates and their friends. The group formed in 2008 after they had graduated from different universities. Zach Rosenblatt said about the field, “It’s nicer now for our purposes. We don’t need much, only soft, green ground and a fence. Jordan Epstein added, “It drains better than real grass, which puddles up. We wouldn’t be able to play on it after a rain.”

But all players affirmed that the turf is much hotter than natural grass. “And it hurts like hell to slide on it — rug burn,” added Rosenblatt, so they try to avoid it. Billy Maughan felt the pain as he instinctively slid into base, as competitive softball and baseball players are inclined to do in the heat of the moment (as are soccer players when they try to kick the ball out from under an opponent and slide). The players on the field and those on the bench cried out in unison, “Oh, no,” cognizant of what would result. The stoic Maughan, wearing shorts, had huge red welts on a knee and thigh. “I should have slid on my shirt,” he quipped.

When I asked Abramson about rug burn he replied, “It would have been experienced at the old Chelsea park field, constructed with knitted nylon carpet. Nylon is a desirable fiber because it is twice as durable as the softer, less abrasive polyethelene fibers. That is why it lasted 12 years. However, the athletes prefer the polyethelene fibers, which is what we recently installed at Chelsea Park.”

Although the Park’s sign bans the use of metal cleats, some players are still not aware of it (while others ignore it). Pro athletes, who took to calling baseball “the game of turf,” complained that sometimes the hot stuff caused the metal spikes to burn their feet or plastic ones to melt. In 2007, Sports Illustrated reported that six Peruvian soccer players suffered foot burns from playing on hot turf.

Chelsea Waterside Park is managed by the Hudson River Park Trust (HRPT). The synthetic field was installed in December 2010 at a cost of $279,000, plus an additional $876,159 for the perimeter fence. HRPT spokesperson, David Katz, vice president of marketing and events, stated back in March, “The field was replaced due to the conditions of the turf, which was ripped up, had holes in it and had to be patched with duct tape instead of turf.” The former field had lasted approximately 12 years.

In a recent email responding to our query about the heat factor, Katz replied, “Since the field opened, it has been heavily used with normal athletic permit holders and special events…we have not heard of one incident or complaint regarding the temperature of the fields since our last communication.”

Saturday, July 30, 3pm. Air temperature: Still in the upper 90s, the intense rays beating down on the open field. Turf temperature: Around 115 degrees. There were only a few heat-immune people, including Peter Klosowicz; his son, Harry, 9; and friend Josh, 10. The boys, who play in a competitive Little League, were practicing hitting and pitching. To Chelsea Now’s query about the new field, Klosowicz pčre replied, “After a rain, it’s easy to use because it doesn’t stay wet like grass. The disadvantage, he said, is “when it’s hot, it’s hot, and there is no shade. But it’s a vast improvement over before.”

Amanda Hendry of the West Village, who was kicking around a soccer ball with two friends, added, “It’s well maintained, but it’s not as nice as a perfectly maintained lawn. But it’s better than the old Astroturf. When I fell I could get cut up.”

Abramson said (in his email) that the black crumbs at Chelsea Waterside and J.J. Walker are derived from automobile tires. “They were at one time considered a fine use of recycled material. Parks no longer specifies tire derived black crumb rubber in our turf orders.”

What Abramson didn’t mention was that “for ten years, the city put down this surface without doing a single test,” said Croft. Patrick Arden, in his article on the dangers of artificial turf, wrote, “Several credible studies had found the crumb rubber contains known human carcinogens and neurotoxic chemicals, as well as lead, chromium and arsenic” (City Limits magazine, “Was New York City’s Shift to Artificial Grass a 300-Million-Dollar Mistake? A Risky Play,” September 2010). Through the Freedom of Information Act, Arden ascertained that a group of doctors at Mt. Sinai Hospital identified several “proven and potential” hazards of synthetic turf made from recycled tires: “excessive heat,” with field temperatures reaching as high as 172 degrees; MRSA, the antibiotic-resistant staph infection that can be acquired through “turf burns;” and chemical exposures.

The Astroturf-style carpet at Chelsea Park and the crumb rubber infill turf at J.J. Walker were both cited for elevated lead levels. The five dust samples taken at Chelsea Park, worn out from years of heavy use, exceeded EPA safety standards for lead, which is 100 ppm (part per million). In January 2009, J.J. Walker tested at 240 ppm. The $1.6 million reconstruction project for the decade-old turf field is in design and will mostly likely be in construction in spring 2012 — more than three and a half years after the high lead reading. Now, the field is uneven: there are areas of green, areas where the black crumbs predominate and sections that are sandy. On July 23, there was a large muddy brown puddle on one side of the field. Abramson of the new field said, “It will be polyethelene fiber tufted carpet with Flexsand coated infill, and will have a beautiful and consistent texture.”

According to the NYC Department of Health and Mental Hygiene website’s “Fact Sheet on Synthetic Turf Used in Athletic Fields and Play Areas,” the city is now using “carpet-style or alternative infill materials on all new fields, and implementing protocols to inspect, test and replace any existing synthetic turf fields that may age or deteriorate.” They are “using strict purchasing protocols to select the best synthetic turf products and requiring suppliers to provide information on chemical content, heating absorbency properties, environmental factors and health and safety issues.”

“We forced the city to stop using recycled tires,” said Croft. “City Council Member Melissa Mark-Viverito, who is chair of the Parks and Recreation Committee, introduced a few bills that really helped. It was a first step. Up to then, Adrian Benepe [the Parks Commissioner] made fun of it.”

In an August 10 phone interview, Viverito stated that in the fall she and Council Member Jimmy Van Braymer will introduce legislation to ban the use of artificial turf in passive areas; Van Braymer’s district is in Queens, where he learned that the Parks Department is planning to do just that.

“I am sure part of the reason is maintenance related, but to me that is not a solution,” said Viverito, “and I don’t buy it half the time.” She pointed out that in the “vast parks system” less than .03 percent goes to parks. “If it is the intent to have a park where people can hang out, when the turf can reach past 130 degrees, this is not a good idea. It is counterproductive to what a passive space is. You want to encourage people to come into the park, not turn them away.”

She said that the legislation two years ago mandated the Parks signs, “especially for young kids to keep their shoes on so they don’t get burned.” Jenna Mastellone, 12, who was hanging out at J.J. Walker Park with her twin sister, Nicole, after softball practice on July 23, observed one step further, “If I don’t have the right shoes on, it goes through me.”

Viverito declared, “We will continue to put pressure on this administration to do the right thing. It has worked sometimes. Other times they have put their heels to the ground and are resistant.”


Ring the bells that still can ring,  Forget your perfect offering.
There is a crack, a crack in everything, That's how the light gets in.
~ Leonard Cohen

“Faced with the choice between changing one’s mind and proving that there is no need to do so, almost everyone gets busy on the proof."
--John Kenneth Galbraith