An international struggle for science and justice

With a growing recognition of the urgent need to act to stop climate change — and the inherent ecological destruction that is built into capitalism, a system predicated on relentless growth and the drive for profit — activists with Science for the People, an organization dedicated to building a movement around radical perspectives on science and society, is expanding the fight for climate justice and ecosocialism.

Inari Sosa, Paulina Zedillo and Fercho Tekuatl, biologists of the National Autonomous University of Mexico (UNAM) and members of the promotional core of Ciencia para el Pueblo (Science for the People-Mexico), explain the launch of the group there, in a statement translated into English by Martín Ochoa and Brian M. Napoletano.

IN LIGHT of the serious social and environmental problems the world faces, we in the scientific community cannot afford to remain ensconced in academia’s ivory towers, as though we were not involved directly in these issues. Facing a corporatist techno-science in service to capital accumulation, we must take the opposing side of a critical science linked to struggles for justice. Construction of a science from, with, for and of the working people is a key task of those fighting for social liberation and respect for all life on Earth.

Those of us in the different areas of investigation and applied science must assume that in addition to intellectuals, we are also part of the working class that moves the world and its history. Thus, our opportunities for employment are governed by the constant changes in the labor market; even the orientation and development of our creative powers are strongly conditioned by the funding of powerful political and economic interests whose support is premised on their own profit. Thus, the results of scientific knowledge are constantly being appropriated by private interests in contradiction to the common good. 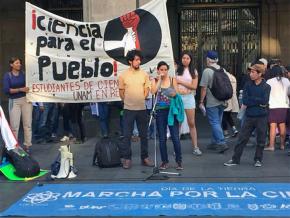 We therefore have a duty to stand for and fight alongside the rest of our class: the working class, as well as the other groups oppressed by the capitalist system. For this, we require complete political independence from the bourgeoisie and its parties.

WITH THIS perspective we, scientists of different political allegiances, at the beginning of 2016 agreed that we need an anti-capitalist rallying point to facilitate efforts to politicize, organize and mobilize our profession. We, along with our comrades in different states around the country, come together in the promotional core of a broad new anti-capitalist group: Science for the People-Mexico.

In so doing, we support the historical project of Science for the People, a social movement that emerged in many universities in the United States at the end of the 1960s, and that, for more than two decades of intense political and intellectual activity, contributed to the struggle in defense of the environment, against racism and imperialism, and on many other fronts fought for a better world.

This political position was bolstered by two important factors: (1) the strong internationalist connection we have had with Science for the People, which is re-emerging and rebuilding itself; and (2) the anti-capitalist tendencies and approaches that we — those who make up the promotional core — have developed in our participation in various movements, such as the Unión de Científicos Comprometidos con la Sociedad (the counterpart to the Union of Concern Scientists of the USA), the “#Yosoy132Ambiental,” the postgraduate assemblies against the CONACYT’s (the National Council for Science and Technology) funding cuts, the Nueva Central de Trabajadores (New Workers Center); work with several labor unions such as the AMINSHAE (an important union of researchers and other workers in the medical sector), the “Consciousness for Humanity” of the EZLN (the Zapatista Army for the National Liberation); several other initiatives aimed at popularizing knowledge and local ecological activism; involvement with other left organizations of different traditions; and other experiences we have had that enrich this project.

In January of the present year, we convened the first meeting as the promotional core of Science for the People-Mexico at the UNAM’s Institute of Ecology, with the international presence of Ivette Perfecto and John Vandermeer, activists in Science for the People at the University of Michigan.

Thereafter, we have undertaken several activities, such as: the participation of one of our delegations in the congress to relaunch Science for the People, held in Ann Arbor, Michigan; the elaboration of pronouncements and manifestos; the organization, in alliance with other groups, of the second march for Science in Mexico City and Morelia; solidarity and support to labor unions in the medical and research sector; meetings for programmatic discussions and debate about the current political situation; solidarity with diverse local struggles; contribution to debate in different scientific forums; and the realization of our own forums in Mexico City and Morelia, with the collaboration of some of our comrades such as Lala Peñaranda from Science for the People-New York.

“Ciencia para el Pueblo” is constituted as the Mexican branch of the international Science for the People organization, although we have programmatic and organizational autonomy. Within the Mexican context, we are an internationalist referent that does not adhere to borders and boundaries. We are a broad space of cooperation between different leftist political currents, as well as activists with no political affiliations.

At present, we are involved in a growing campaign for organization and programmatic discussion about the development of a science that fights for social liberation and the care of life on Earth. In the medium term, we intend to consolidate a network of committees and contacts in several parts of the country, with a view to holding a congress in which we could consolidate a national organization that coordinates active participation in multiple struggles and produces materials on diverse themes, including agroecology, gender studies, integrated watershed management, political ecology, political economy, sustainability, climate change, etc.

THE NEXT administration, headed by Andrés Manuel López Obrador (AMLO), will be the result of a negotiated transition that guarantees the maintenance of the interests and privileges of the oligarchy in the face of the regime’s political crisis on the one side, yet attempts to diffuse the social unrest channeled into the polls on the other. It is already expressing ambiguities and contradictions in several areas, for example: the appointment of Elena Álvarez from the Unión de Científicos Comprometidos con la Sociedad (the Union of Scientists Committed to Society) at Consejo Nacional de Ciencia y Tecnologia (the National Council for Science and Technology) and the appointment of Víctor Villalobos — see the “Monsanto Law” — at the Secretaría de Agricultura, Ganadería, Desarrollo Rural, Pesca y Alimentación (the Ministry of Agriculture, Livestock, Rural Development, Fisheries and Food); or the proposal that major issues such as the decriminalization of abortion or the construction of the new Mexico City International Airport.

AMLO will, obviously, retain intact the foundations of neoliberalism while at the same time seeking to form a political clientele through mostly symbolic concessions to social movements.

In this scenario, the possibility of changing the correlation of forces in favor of the working-class majority, the native people, and the care for biodiversity will lie with the independent mobilization of all the groups in resistance today. Science for the People supports national and international self-organization in peasant movements, student movements, urban workers, women, gender activists, people living with disabilities, those affected by environmental degradation, migrants, victims of structural violence, and other oppressed groups, with the aim of forming a social pole capable of challenging the national oligarchy and its international backers, and of initiating a process of radical transformation of the country and the world.

First published at the website of the Workers’ Revolutionary Party of Mexico. Translation by Martín Ochoa and Brian M. Napoletano.