The Fight for Mauna Kea Is a Fight Against Colonial Science

The protests by Native Hawaiians against the Thirty Meter Telescope are a cry for respect for indigenous autonomy.

By Keolu Fox and Chanda Prescod-Weinstein 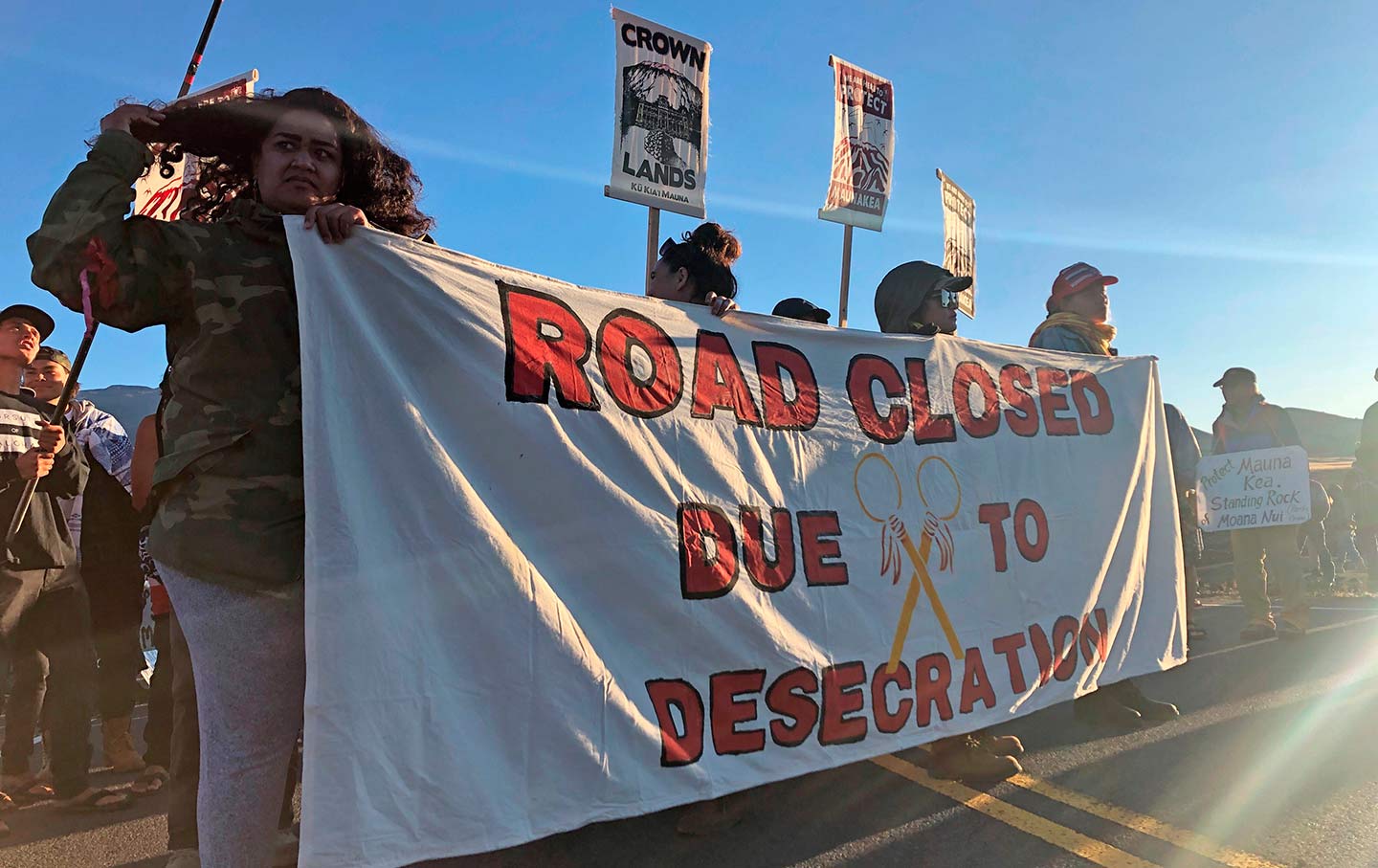 Demonstrators gather to block a road at the base of Mauna Kea on July 15 to protest the construction of a giant telescope on sacred Native Hawaiian land. (AP Photo / Caleb Jones)

Kānaka ʻŌiwi, or Native Hawaiians, have long gazed into the sky to develop sophisticated knowledge systems about the stars, and have even welcomed non-Hawaiian communities to join in doing so. In 1874, King Kalākaua invited British astronomers to observe the transit of Venus; he dreamed of building an observatory on the Big Island, perhaps at a school.

Nearly a century and a half later, the island of Hawai’i is getting a world-class observatory, but not at the invitation of Native Hawaiians, and not at a place of their collective choosing. A consortium of several international universities backed by six countries wants to build a $1.4 billion Thirty Meter Telescope (TMT) on Mauna a Wākea, a dormant volcano in Hawaiʻi that, measured from its base, is the tallest mountain in the world. This observatory will allow scientists to peer deep into the far reaches of space and time, perhaps to see galaxy formation as it was just getting underway. But it will also disturb hallowed ground, a spot of deep cultural-spiritual resonance as well as ecological sensitivity for Kānaka ʻŌiwi. Since construction was slated to begin last week, hundreds of Kānaka ʻŌiwi activists known as kia’i (protectors) have assembled at the site, wrapping themselves in blankets and chaining themselves to cattle guards to prevent the National Guard from escorting telescope-building materials up the Mauna Kea access road.

Mauna a Wākea has long been a site of sacred cultural activity for Kānaka ʻŌiwi, at times serving as a burial ground. The sacredness of the Mauna is embedded in its Kānaka ʻŌiwi name, which reflects its connection to the sky: Wākea is the sky father in Kānaka ʻŌiwi cosmology. Despite this history, scientists from the United States, Europe, and Asia have been digging up the land since the 1960s to build 13 astronomical observatories—a desecration, in the eyes of many Kānaka ʻŌiwi, of a sacred site by people who are also violating indigenous sovereignty. With the TMT, which will extend 18 stories and be accompanied by a second 21,000-square-foot building, Indigenous Hawaiians have determined they will not back down, even in the face of arrests, even as the governor has issued an emergency proclamation.

“We are taking a stand not only to protect our mauna and aina, our land, who we have a genealogical connection to…,” protector Kaho’okahi Kanuha told CNN. “We are fighting to protect it because we know if we cannot stop this, there is not very much we can fight for or protect.… This is our last stand.”

As a Kānaka ʻŌiwi geneticist and black Caribbean and American astrophysicist, we have been watching the last week’s developments with horror, particularly the arrests of the Kūpuna, or elders. We were both taught to always respect our elders. We were taught to listen intently and speak when spoken to. For Kānaka ʻŌiwi, it is a deep-seated value to respect the Kūpuna. As we witnessed many of the matriarchs and patriarchs from the Native Hawaiian community putting their bodies on the line to protect the Mauna, we asked ourselves, “How did we get here? And where do we go from here?”

In its worst incarnation, the conflict over the TMT has been framed as a clash between out-of-date spirituality and rigorous, modern science, with TMT supporters dismissing the Kānaka ʻŌiwi as violently “anti-science”: stuck in the past, resistant to a superior Western modernity, and putting that modernity at risk in the process. It’s a frame that was on display as early as 2015; world-renowned, barrier-breaking astronomer Sandra Faber famously wrote an e-mail characterizing the protectors across Hawai’i as “a horde of native Hawaiians who are lying about the impact of the project on the mountain and who are threatening the safety of TMT personnel.” Faber ultimately apologized, but the bias of her words and the support they received has echoed into the present, in the words of others and in the characterization of the protectors by far too many TMT supporters as ugly stereotypes of the confused, angry, dishonest Indigenous American.

Beyond their patent offensiveness, such characterizations are as false as they are unhelpful. “Science and culture have long coexisted in Hawaiʻi,” Ecohydrologist Aurora Kagana-Viviani wrote in a recent Medium post, in which she traced the ways the scientific establishment all too often continues to ignore this evident fact. What have not always coexisted are scientific inquiry and fundamental respect for the people who come under science’s microscopes—or inhabit the realms of its telescopes.

Indeed, far from some replay of an ancient clash between tradition and modernity, this is a battle between the old ways of doing science, which rely on forceful extraction (whether of natural resources or data), and a new scientific method, which privileges the dignity and humanity of Indigenous peoples, including Hawaiians and the black diaspora. It is a clash between colonial science—the one which, under the guise of progress, has all too often helped justify conquest and human rights violations—and a science that respects indigenous autonomy.

If we were to examine each stage of approval in the process of developing the TMT, it seems painfully obvious that the long legacy of colonialism played a significant role in determining which stakeholders had a seat at the table and which ones didn’t. It is clear that the systems of approval that claim to be inclusive of Kānaka ʻŌiwi perspectives have instead supported the agendas of universities, politicians, and legislative bodies. Nor does it seem that very much (if any) feedback from the cultural knowledge holders of the Kānaka ʻŌiwi community has been taken seriously, or that any compromise regarding decision-making power was given serious consideration at any stage of the project.

There is also the basic question of why Native Hawaiians should only have representation rather than control over these decision-making processes that shape the future of their sovereign lands. Kānaka ʻŌiwi could participate only as officials appointed to colonial government organizations or by pleading in public forums that had no power over the final decision.

The Kūpuna are the keepers of knowledge in Kānaka ʻŌiwi communities. Instead of becoming human barricades, shouldn’t they have been included in conversations about the development and construction of what will become not only one of the largest telescopes in the world but also the largest building constructed on the Big Island of Hawaiʻi, built on the most sacred piece of geography in Native Hawaiian history?

We believe that if Kūpuna were properly included as stakeholders throughout the development of the TMT plan, fair compromises might have been reached that would not only have resulted in Hawaiʻi’s remaining a world-class destination for observational astronomy but also truly supported Hawaiian culture in the process.

We understand that the past cannot be undone. But the future is unfolding now. In the last week alone, the Kūpuna have been arrested—criminalized—along with some younger kia’i for trying to protect a long-sacred space. And the colonial governor, David Ige, has declared a state of emergency, which allows him to mobilize the National Guard against the kia’i.

We have been among the many scientists who have called on TMT and the State of Hawaiʻi to refuse to criminalize those who are protecting the Mauna. This is the most basic respect that should be shown to the elders. But more must be done. TMT should institute a moratorium, such as the one put forward by State Senator Kai Kahele, and halt the construction attempts that began on Monday July 15; instead, the State of Hawaiʻi and a diverse community of Kānaka ʻŌiwi, including the Kūpuna cultural knowledge holders who are most familiar with the Mauna’s historical and spiritual significance, should negotiate a process to build consensus on what should happen next.

The movement we are witnessing today is not new, despite some claims made by scientists on social media. It has been at least a century in the making, from the first arrival of colonialism in Hawaiian lands. It is time for the State of Hawaiʻi to negotiate in good faith with this movement and for scientists to support a process of justice, reconciliation, and healing. As protector and University of Hawai’i professor Bryan Kuwada says, “We live in the future. Come join us.”

Chanda Prescod-Weinstein is an Assistant Professor of Physics & Astronomy and Core Faculty in Women’s Studies at the University of New Hampshire and a Research Affiliate in Science, Technology, and Society Studies at the Massachusetts Institute of Technology.