The Anglo-American Threat of a Eugenics Revival

The resignation of a junior advisor to British Prime Minister Boris Johnson for advocating eugenics sparked discussion on both sides of the Atlantic, and highlighted the worrying trend that eugenics may be becoming normalized again.
By Pete Shanks | 02.21.2020
Biopolitical Times 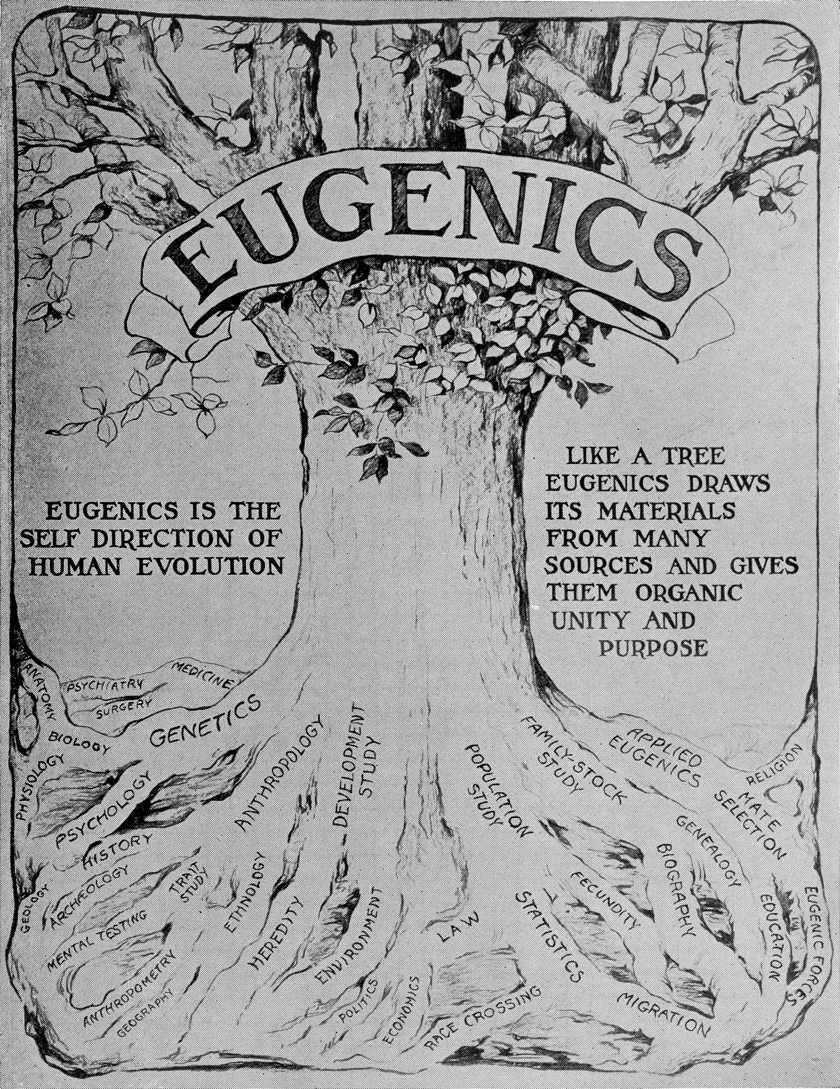 The resignation on February 17 of Andrew Sabisky, a recently hired junior advisor to British Prime Minister Boris Johnson sparked a “shock and horror” response on both sides of the Atlantic. The reason: A couple of years ago, he had publicly endorsed eugenics and made what he considered practicable suggestions for implementing it.

Dominic Cummings, who hired and supervised Sabisky, is still employed.

Of course he is. Cummings, who is frequently known as Boris Johnson’s brain , has been an open eugenicist for years, notoriously advocating for genetic IQ tests: “We should give this ~2% a specialist education.” Given the sheer quantity of press coverage , in the UK and US , it’s possible that on this occasion Cummings might be in trouble . Unfortunately, scandals like this tend to be largely performative.

It is a thoroughly good thing that outbreaks of eugenics advocacy prompt immediate push-back,  (1 , 2 , 3 , 4 ). It is a bad thing, however, that they still need to. And a remarkable thing how frequently this occurs.

It happens that February 16th, the day before Sabisky resigned, was the birthday of Francis Galton, the man who coined the term eugenics, and the universally acknowledged father of the concept. The Royal Society saw fit to commemorate it in this 1:15 a.m. tweet :

In 1822 #OnThisDay, Sir Francis Galton was born. His scientific career was based on his fascination with statistics, however his most intensive research was devoted to human physical attributes such as height, chest width, arm strength and colour vision. #Science

By the end of the day, following complaints, the Society confessed (again, on Twitter) that “This tweet was not up to our usual standards” and “Any discussion of Galton should acknowledge the historical wrongs of his enthusiasm for eugenics.”

A couple of hours before the Royal Society’s first Galton tweet, Richard Dawkins, the author of The Selfish Gene and many other titles, now a retired Oxford Professor, tossed off this late-night tweet , possibly inspired by the Sabisky news, to his 2.8 million followers:

It’s one thing to deplore eugenics on ideological, political, moral grounds. It’s quite another to conclude that it wouldn’t work in practice. Of course it would. It works for cows, horses, pigs, dogs & roses. Why on earth wouldn’t it work for humans? Facts ignore ideology.

Eyebrows were raised. Enough of them, quickly enough, that at 7:10 the following morning, and again at 8:41 , Dawkins clarified his position:

For those determined to miss the point, I deplore the idea of a eugenic policy. I simply said deploring it doesn’t mean it wouldn’t work. Just as we breed cows to yield more milk, we could breed humans to run faster or jump higher. But heaven forbid that we should do it.

A eugenic policy would be bad. I’m combating the illogical step from “X would be bad” to “So X is impossible”. It would work in the same sense as it works for cows. Let’s fight it on moral grounds. Deny obvious scientific facts & we lose — or at best derail — the argument.

There are multiple problems with this. To begin with, talk about “breed[ing] humans to run faster or jump higher” is offensive. Then there is the question of who decides what “improvement” to implement — if any. That is the central question of today’s debates about whether the heritable genetic modification of people should be allowed. Too often the assumption is made that it’s going to happen and the issue is how to regulate it; that’s not even relevant until a decision is made about whether it should happen at all — which is a social, political and ethical question, not a scientific one.

Besides, eugenic breeding of farm animals and pets has never been an unalloyed success. For one thing, the “failures” tend to be discarded, if they even survive. Also, to take a familiar domestic example, many breeds of dogs are chronically unhealthy . Moreover, the more we learn about human genetics and anatomy , the less we seem to understand about polygenic effects (traits influenced by many genes). To claim that “of course” eugenics would work in people is scientifically unsupportable in any real-world kind of scenario.

But that’s not all. That statement is made in a social context. This gets very personal. Dawkins —like myself — was born in a British colony, as part of the white ruling class. We know of discrimination, of racial profiling, of sterilization, eugenic murders and all the rest, we know they happen — but not to us. And, as Adam Rutherford has explained in an excellent Twitter thread :

Furthermore, to subsequently opine about policy or social implications without considering that the consequences are not directed at you historically or in the present is deeply problematic. 5/n

That does not necessarily imply that Dawkins supports eugenics; he insists he does not. But he is detached from the issues, “decoupled” as Tom Chivers explains, in a way that a commentator like Charles M. Blow can never be. Dawkins assures us he meant no harm, he does not approve, he was merely discussing the scientific possibilities.

These outbreaks of support for eugenics, or at least for its plausibility, are certainly not confined to Britain. Why, here in the USA, “race science” has over the last few years had an unwelcome revival . In 2020, Charles Murray, the co-author of The Bell Curve, has a new book: Human Diversity: The Biology of Gender, Race, and Class. To quote a headline in The New Republic : Charles Murray Is Never Going Away. The review in The New York Times by Parul Sehgal sums it up nicely:

This book is for the believers. Rigorous readers, skeptics, the unindoctrinated — you won’t be persuaded by “Human Diversity,” but why should that matter? You’re not even invited. How’s that for a safe space. How’s that for an orthodoxy.

We in America are, for the most part, living through the age of Trump, when facts are no longer, as John Adams would have us believe, stubborn things. President Trump is unquestionably both a racist and a eugenicist . He claims to have the best genes. He’s “proud to have that German blood.” He calls himself “high-IQ.” Of course he does. When pressed on Twitter to account for how high, he simply retorted , “the highest, asshole!”

It is telling that one of Trump’s favorite insults is “low-IQ,” which he applies to an extraordinary number of distinguished individuals including Joe Biden, Rep. Maxine Waters, actor Robert De Niro, former President George W. Bush, and Rick Perry, his Secretary of Energy. Others, such as “the squad” of progressive US Representatives elected in 2018 (Alexandria Ocasio-Cortez, Ilhan Omar, Ayanna Pressley, and Rashida Tlaib — all women of color) are “not very smart.” His first Attorney General is a “dumb Southerner.” His first Secretary of State is “dumb as a rock.”

No wonder he is trying to implement the most restrictive and racist immigration policies since 1924—the heyday of eugenics.

A century ago, eugenics was a mainstream, international phenomenon. The policies it inspired spanned the political spectrum: harsh immigration restrictions; laws permitting involuntary sterilization of those authorities deemed “unfit”; and “positive eugenics” efforts that relied largely on cultural persuasion to encourage the “fit” to have more children. It was invented in Britain, developed in the United States, and taken to its most hideous extreme in Germany. After World War II, most people thought that eugenics as national policy had been utterly discredited.

Consumer-driven techno-eugenics, however, has been a developing problem for at least two decades: That’s the proposed production and sale of “designer babies” specified and built for “enhancements” such as blue eyes, light skin, athletic or musical ability and even intelligence. Make no mistake, this is a very live question right now. The controversy about heritable human genome modification is at a boiling point. Some proponents contend that this technology (which they heroically assume will be successful) should be used only in the extremely rare instance where there’s no other way for a couple to have a genetically related and unaffected child. Others are frankly interested in enhancement.

Of course, there is some academic cover for these efforts. A mutually supportive circle includes controversial North American and British-based academics such as Robert Plomin and Stephen Hsu, as well as the likes of Murray and the noted transhumanist Julian Savulescu. Both Plomin and Hsu were involved in the Chinese search for “genius genes,” which were said to be three months away seven years ago; that effort has since been abandoned.

The bulk of genetics researchers, however, view the search for actionable IQ genes to be more or less a wild goose chase. For example, Dr. Danielle Posthuma, a Dutch geneticist, and her colleagues discovered 52 genes that they think affect intelligence — each by a miniscule fraction of an IQ point. Jonathan Pritchard of Stanford and colleagues have even suggested that the genetics of complex traits is not just polygenic but omnigenic — essentially, affected by the entire genome.

So that’s all right, then?

Sadly, no. A renegade sector of the fertility industry is already trying to sell the selection of embryos for particular traits; they cannot guarantee results, but they claim to improve the odds. The company pushing the envelope hardest and fastest seems to be Genomic Prediction , co-founded by Hsu. They claim, among other things, to be able to identify genomes at the extreme tail ends of the IQ curve. So far, they refuse to offer embryo selection for the high end “for ethical reasons” but are selling selection of embryos with, allegedly, “intellectual disability ” — which would therefore not be implanted. (Sound marketing: if a genius were discarded, no one would ever know.) They also claim to select against the few monogenic disorders (cystic fibrosis, for instance) and a number of polygenic ones, including heart attack risk, breast cancer and “idiopathic short stature.”

This is precisely the melding of capitalism with eugenics. It is supported by modern marketing culture, it relates to the whole self-improvement industry, and it amplifies the pressures on parents to invest in “the best” for their children. All this while reinforcing the power of perception about biological superiority.

No, this is not all right.

Trump of course denies his racism, as does Johnson his, but that doesn’t deter white supremacists too much. After all, some of them have managed to rationalize away evidence from their own DNA that they don’t strictly qualify to join their own exclusive group.

It’s easy to make fun of this, but it’s a deadly serious issue. In the United States, we’ve endured horrifying mass shootings perpetrated by individual gunmen with explicit white supremacist ideologies. And we are already seeing people — brown people, of course — being refused the chance even to apply for asylum, despite horrifying abuses in their home countries. This is against national and international law, as well as normal human decency.

It’s also the next step in the evolution of eugenics.

There is a rise in right-wing nationalism across Europe and the United States. Immigration , especially from Muslim and Central American countries, is increasingly controversial. In this context, Britain and America could once again be leading the way to world-shaking eugenic tragedies. Johnson is settling in for a long term as Prime Minister, and Trump may even be re-elected, so it is vitally important to denounce and oppose both the revival of old-school eugenic attitudes and the introduction of new high-tech and consumer-driven varieties of eugenics.