Utah Protesters Claim Hospitals Are Killing People Who Have COVID

And infected patients coming into the hospital are much more hostile than they were before. 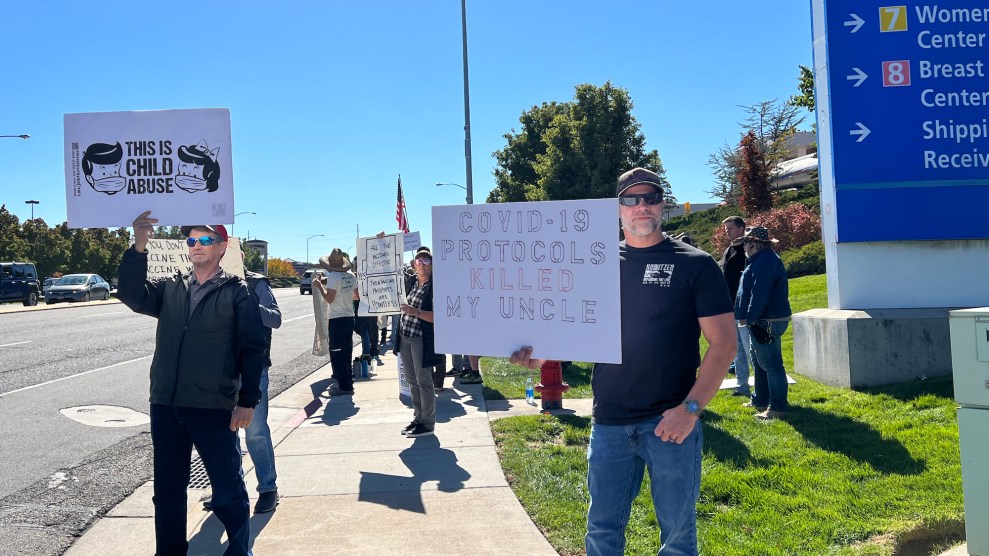 Protesters outside a Salt Lake City hospital October 16, 2021. Stephanie Mencimer/Mother Jones
Fight disinformation. Get a daily recap of the facts that matter. Sign up for the free Mother Jones newsletter.

Greg Johnson is standing on the corner of State Street in suburban Salt Lake City, Utah, holding a neatly stenciled sign that says, “COVID-19 Protocols Killed My Uncle.” Behind him looms the Intermountain Medical Center, the largest hospital in the region. Johnson is one of about 30 people who’ve come to protest Saturday because they believe that the hospital is murdering people with the coronavirus by putting them on ventilators, injecting them with the anti-viral Remdesivir, and refusing to give them intravenous vitamin C or the deworming drug Ivermectin.

It’s the latest in the ongoing COVID-related protests that have popped up since the beginning of the pandemic, as residents have fought mask and vaccine mandates and lockdowns in a state that has imposed few public health restrictions. For a while last year, Utah had escaped the worst of COVID that throttled places like New York. But that’s changed, as big swaths of the population refused the vaccine and the more contagious Delta variant has swept through the state.

Only 66 percent of Utah residents over 12 have been vaccinated, which is on par with the rate nationally, but that figure drops closer to 30 percent in many rural counties where cases have been spiking. Hospital ICUs have been running at capacity since the late summer, as the number of patients being treated for COVID has jumped 300 percent since June. Just in the week ending October 15, 75 people in the state succumbed to the virus, and the Utah Department of Health estimates that in the past month, unvaccinated people in the state were 12.6 times more likely to die from COVID than vaccinated residents. 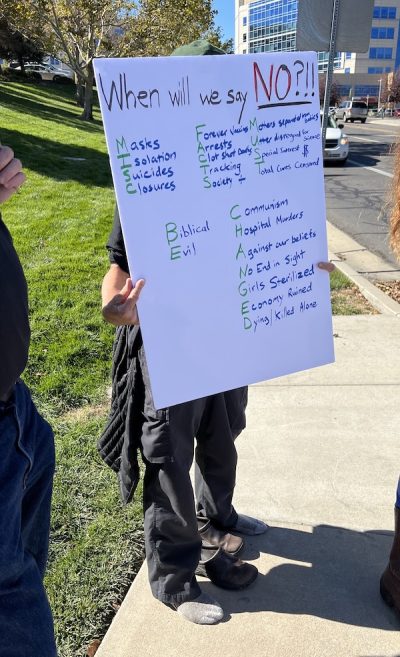 The deaths, however, aren’t changing the minds of the most committed anti-vaccine activists and others involved with local “patriot” groups. After successfully fending off most mask mandates in schools and elsewhere, they’ve turned their focus to the hospitals, where unvaccinated people have been turning up with COVID and discovering that the hospital won’t give them the malaria pills or horse dewormer they think will save them even as they reject proven therapies.

Johnson, an electrical engineer who works in the medical field, says he’s about to lose his job because he refuses to get vaccinated. He has never been to a protest before, but he heard about this one from People’s Rights, the group founded by the far-right activist Ammon Bundy, who’s now running for governor of Idaho. Johnson says that a month ago, he was golfing with his unvaccinated uncle, Dale Grant, a week before Grant was hospitalized with COVID. He says doctors gave his uncle Remdesivir, which Johnson believes destroyed his kidneys. Grant’s son demanded that the hospital give Grant intravenous vitamins, but by then, Johnson says, it was too late. Before he got COVID, Johnson says, his 82-year-old uncle was as “healthy as an ox.”

He says he also lost another friend to the virus three weeks ago. This time, the hospital put his friend on a ventilator, which he says “destroyed his lungs and he died.” So now he’s in front of the hospital trying to spread the message that hospitals kill. Johnson says he’s not anti-vaccine; he and the other protesters are just interested in freedom of choice. “We’re not ignorant people,” he says. “We’re just wondering why it’s not OK to question.”

The reception to the protest is mixed, as cars come and go from the hospital—or en route to the Costco next door. Some people honk in support. One or two people shout obscenities and call the protesters science deniers.

A spokesman for Intermountain Healthcare writes in an email, “Activities such as this are very disappointing to the heroic doctors, nurses, therapists, and other healthcare workers who have worked tirelessly during the pandemic to serve our communities.”

Similar protests were slated for hospitals all across the state Saturday, including one in St. George, in Southern Utah, where protesters have been galvanized by the story of an anti-vaccine activist who lost both of her parents to COVID last month. Kasandra Leavitt is a well-known fixture on the local anti-vaccine circuit as the driver of the “truth truck,” a custom Ford pickup tricked out with giant digital billboards that display messages like “Big Pharma is Making a Killing,” “Mass Non Compliance IS THE only way to END THIS” or ” Dr. Fauci and Bill Gates for Prison 2021.”

Over the past few months, she has tailed a local pharmacist who runs a state-supported mobile vaccine clinic. When he sets up to vaccinate people, Leavitt shows up in her truck with billboards warning of vaccine side-effects or advertising screenings of “Plandemic,” the slick 26-minute video that went viral on Facebook in 2020 and claims a secretive cabal of elites was using the coronavirus to take over the world.

Earlier this month, Leavitt claimed on Facebook that the IHC hospital in St. George had killed her parents, who died within minutes of each other in late September. She wrote that when her mother entered the hospital, the doctor planned to put her on a ventilator and administer Remdesivir. “I gave him a Big Hell NO,” Leavitt wrote. In response, she wrote, the doctor told her that he was going to write “Do not resuscitate” in her mother’s chart, asking,  “Is that what you want?” She says the doctor then informed her that if she didn’t want to follow the protocol, her mother didn’t qualify for ICU care, and he moved her to another floor of the hospital to die without receiving Leavitt’s treatments of choice, such as IV vitamins and the deworming drug Ivermectin.

“Why do hospitals deny proven therapies? Deny patients IV vitamins?” she continued in her Facebook post. “This is a very dark time in the history of healthcare. The equivalent of medical malpractice. They overtreat with deadly drugs. Remdesevier and ventilation. If a patient refuses this protocol, the hospital will then under treat wait and watch the patient die. It’s barbaric, bad medicine.”

An IHC spokesman said the hospital could not comment on the case due to federal privacy laws. “Intermountain Healthcare provides the best possible care for all our patients based on accepted evidence-based practice guidelines from the scientific and medical communities,” he said.

At the Salt Lake City protest, a number of people tell me that to really understand the hospital situation, I need to listen to southern Utah talk radio star Kate Dalley. Dalley’s show airs daily on the Fox News radio station in St. George, and she claims her podcast has drawn three million listens. Virtually every major anti-vaccine activist has appeared, along with garden-variety conspiracy theorists like Trump confidante and “stop the steal” activist Roger Stone.

In August, Dalley aired a show detailing how she supposedly saved her diabetic husband from murderous hospital staff when he got “COVID pneumonia.” She claims he entered the hospital with extremely low oxygen levels after the Ivermectin he was taking didn’t cure him. (It was just too low a dose, she concluded.) Doctors wanted to put him on a ventilator. Instead, he walked out of the ICU after just three-and-a-half days because when he was admitted, she had demanded that the hospital give him massive, intravenous doses of vitamin C. She provides instructions on her website for people who want to fight a hospital COVID protocol, including advice like, “Don’t let them do Remdesivir. It can cause organ failure,” and “REFUSE THE VENT. Over and over and over and over. Be firm. Be nice. Be firm.”

Protesters on State Street Saturday echoed Dalley’s theories about “what is actually killing people in the hospital.” Several told me that the hospital had a financial incentive to put people on ventilators because it gets much more federal money for the treatment than it would for, say, vitamin infusions. But the spread of such ideas has created more headaches for Utah’s frontline healthcare professionals than just the inconvenience of a few protesters greeting them at the hospital gates.

In September, the medical director of Park City Hospital in Summit County, which has the highest vaccination rate in the entire state, told the county health board that patients coming into the hospital with COVID were behaving very differently than they had in the past. “We’re seeing hate in their eyes,” Dr. Wing Province told the board, according to the Park Record. Nurses and doctors working in the overburdened ICU were dealing with hostile patients who often didn’t believe they were infected or demanded unproven treatments. Some had even become violent because they believed, as the protesters do, that the hospital was trying to kill them.

“We had a gal who came in whose oxygen levels were critically low, to the point where she could nearly die if we didn’t give her oxygen,” Province said. “And as our nurses went to her aid to put on oxygen, to put in an IV, and try to stabilize her, she being COVID-positive, spit in our nurse’s face, kicked our nurse in the chest with her foot, and scratched all the technicians and everyone else that were coming in to try to put in an IV.” He described a patient who left the hospital early against medical advice whose family is now suing IHC because doctors refused to give the patient Ivermectin.

The people protesting at IHC this weekend are primed to join the hospital resistance should they fall ill. One woman wearing American flag cowboy boots who declined to give her name tells me, “The protocol’s actually killing people. They won’t give people Ivermectin. Most of the people getting COVID today are vaccinated.” 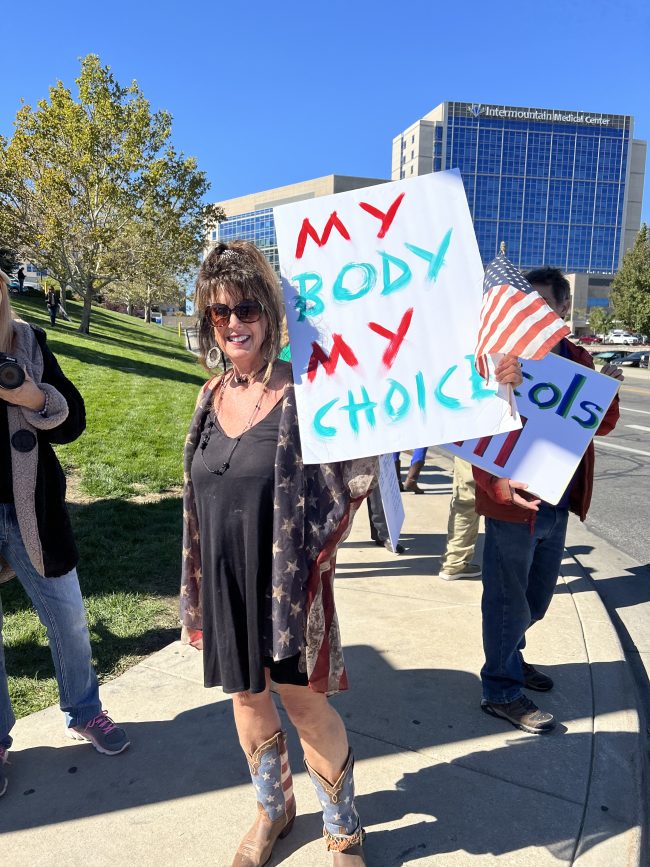 As she lectures me about the evils of vaccines, which she believes also cause autism in children, a Costco shopper named Daniel Rodriguez stops by to get a better look at her sign. “’My body my choice,’” he reads aloud, and then tells her, “My choice is to get vaccinated.”

He tells the woman and her friend that his daughter works in the hospital and has seen first-hand all the people dying from COVID. He and his wife had been infected last year by their five-year-old granddaughter. “My granddaughter almost killed my wife,” he explains.

One of the anti-vaccine activists asks Rodriguez if he’s from Mexico. When he says yes, she enthuses, “I buy my Ivermectin from Mexico!” She then proceeds to tell him about the drug’s alleged benefits for prevention of a virus that she claimed was released by humans “to harm us.” She and her friend continue to pummel Rodriguez with anti-vaccine and “pro-freedom” propaganda.

He listens politely, and later tells me he talked to all of the protesters on the sidewalk after seeing their signs. He told them he agreed that they had the right to avoid vaccines or masks, but, “You might get somebody sick. You don’t have that right.”

“You have to be sure you’re doing the right thing,” he tells me. “They’re not.”