By
Liu Xin
and
Zhang Hui Fruitful achievementsThe first white paper on China's biodiversity conservation discusses in detail China's achievements and efficient governance in the field and draws an overall view for readers on China's vast land and sea territories, complex terrain, diverse climate, unique ecosystems, and abundant species. It contains data demonstrating how China advances biodiversity conservation and development in parallel. For example, China's forest coverage and forest reserve have both maintained growth over the last 30 years, with China also realizing the largest growth in forest resources among all countries. Between 2016 and 2020, China restored 1,200 km of coastline and 23,000 hectares of coastal wetlands. Between 2000 and 2017, it contributed about 25 percent of global vegetation growth, the biggest share among all countries. Since 1956, China has established close to 10,000 protected areas and launched on a trial basis 10 national parks, including one at Sanjiangyuan, the cradle of the Yangtze, Yellow and Lancang rivers. These systems have brought 90 percent of terrestrial ecosystem types and 71 percent of key state-protected wildlife species under effective government protection. By launching targeted campaigns to save endangered species, China has also rescued rare and endangered wildlife and increased their population. For example, the population of giant pandas in the wild has risen from 1,114 to 1,864 over the past four decades. The crested ibis population has increased from only seven to over 5,000, with both wild species and artificial breeds counted. The Asian elephant population in the wild has grown from 180 in the 1980s to about 300, according to the white paper.For years, China has achieved significant progress when it comes to biodiversity conservation of forests, grasslands, wetland and rivers and will carry on our working on the protection of the eco system, endangered species and genetic resources to contribute to national and global biodiversity, Li Chunliang, deputy chief of the National Forestry and Grassland Administration, said at the Friday press conference. Structured top-level design for biodiversity and including it in a major national political agenda are key reasons why China can make such great achievements on biodiversity conservation, Liu Yan, a research fellow from Nanjing Institute of Environmental Science of Ministry of Ecology and Environment, who took part in drafting the white paper, told the Global Times on Friday. Liu noted that what impressed her most when preparing for and drafting the white paper is the increasing sense on protection across the nation - from national leaders to children, from social organizations to governmental institutions, people are aware of and talking on protecting the environment as it closely related to our life and to protect it is to protect humans.The white paper echoed Liu's remarks. It noted that since the 18th National Congress of the Communist Party of China (CPC) in 2012, China has been prioritizing eco-environmental progress and pursuing green development under the guidance of Xi Jinping thought on eco-civilization. "A new pattern of biodiversity conservation has taken shape, with improvements to the legal system, supervision mechanisms and governing capacity for eco-conservation, marking the beginning of a new era for biodiversity conservation in China," read the white paper. Liu said that all measures China has taken on biodiversity are closely linked to each other - the top-level ensures governments of all levels include biodiversity in local development plans, drafting and revising laws and regulations to offer timely protections, and the supervision mechanism would make sure the implementation. "All these also reflects the advantages of our systems." 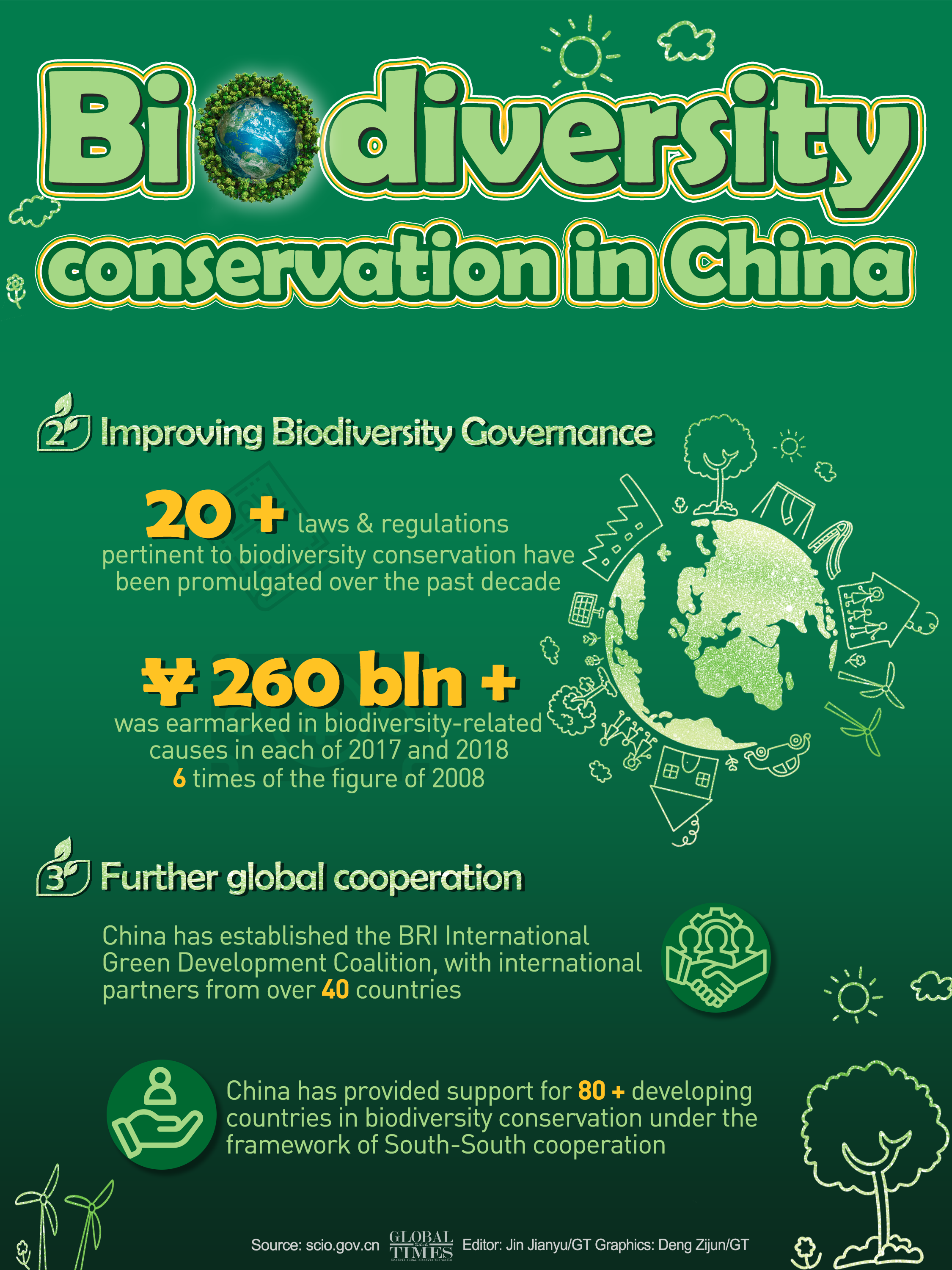 Over the past decade, China has promulgated and revised more than 20 laws and regulations pertinent to biodiversity conservation, including laws on forestry, grassland, fishery, seed, biosecurity as well as laws on the protection of wild animals. It also established the system of central inspection on eco-environmental protection in 2015, which has been developed to cover 31 provincial-level administrative units, relevant departments and some state-owned enterprises.Liu also pointed out that what makes China's conservation on biodiversity unique is that it is balanced protection and sustainable development. "President Xi has emphasized eco-civilization and stressed that clean water and green mountains are invaluable assets. This is sustainable development - to push for high-level development with high-level protection of the environment," Liu said. China is pursuing a vision to live in harmony with nature, echoing the ideas of many international conventions. "I am very proud when drafting the white paper as many of China's ideas on biodiversity pull ahead of the international community," Liu noted. 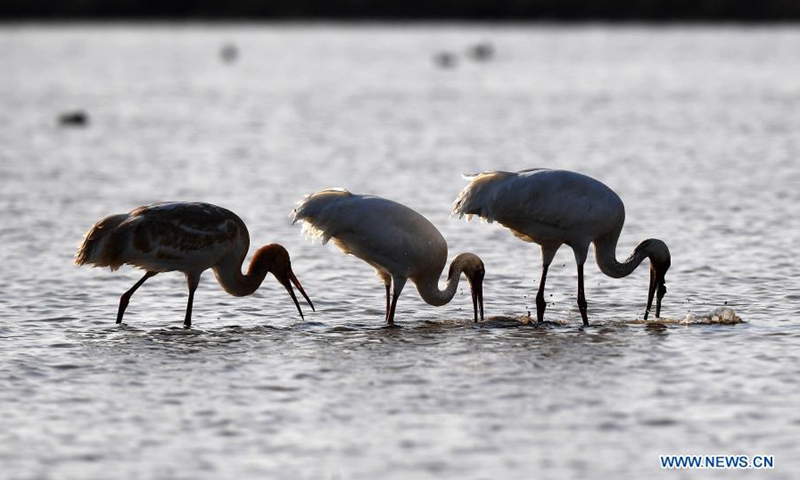 Refuting outside attacksAside from outlining achievements, the white paper also pointed out that as one of the important forces for global biodiversity conservation, China made significant progress by adhering to multilateralism and mutual cooperation. It has provided support to more than 80 developing countries in biodiversity conservation under the "South-South" cooperation framework. "China will continue deepening international exchanges and global cooperation on biodiversity to contribute to the harmonious coexistence of nature and humanity with China's approach," Zhao said.However, in recent years, some Western countries including the US have turned a blind eye to China's achievements on biodiversity conservation and accused China of endangering wildlife with fishing and damaging rainforests.In response, Chinese experts criticized the US and some Western countries for double standards and making groundless accusations against China in the hope of containing China and other developing countries by taking the moral high ground.The US has never signed the Convention on Biological Diversity as it severely damaged biodiversity during domestic industrialization and extinguished a large number of species. It is not willing to take the price or the responsibility on biodiversity conservation, Li Junfeng, former director general of China's National Center of Climate Change Strategy Research under the National Development and Reform Commission, told the Global Times on Friday. At the 1992 Earth Summit in Rio de Janeiro,  almost all global leaders signed the Convention on Biological Diversity, except then US president George H.W. Bush. Experts and environmentalists have long said that the US refusal to ratify the agreement could weaken biodiversity conservation at home and abroad.Li noted that due to its selfishness and weighing economic benefits, the US has dodged many international conventions. For example, it has not acceded to the United Nations' Convention on the Law of the Sea. But not even being a party of these conventions did not stop the US from using them to attack others, Li said, noting that the US accuses China and Russia of violating the Convention on the Law of the Sea."It is typical US style to ask others to behave themselves with rules while indulging itself for treading on them to showcase its 'global governance' and dominance," said Li, noting that to defend the shared home of humans, every country, including the US, should fulfill its promises. This is why we emphasize global effort at the COP15 to put aside disputes and work together.
Sent from my iPhone